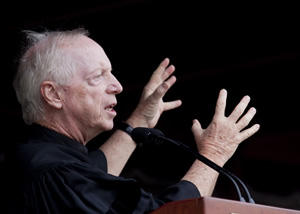 Father Thomas J. Hagan, O.S.F.S., former Catholic chaplain at Lafayette and the founder of the humanitarian organization Hands Together, spoke about his work in Haiti at the 175th Commencement. He also received the honorary degree of Doctor of Public Service. A transcript of his speech follows.

Let me first say congratulations to the graduating class of 2010. Congratulations to your friends and to your families and, above all, to your wonderful parents. I look out at you now and I remember the first time I came to this campus. This morning I walked around, some tears in my eyes, and I found myself smiling a lot as well. These were eight wonderful years for me.

I remember coming from the University of Pennsylvania, and before I came here they said, “Lafayette is a great school, a great academic school, but all the students are up on that hill. They really don’t know much about what’s happening in the world.” The first day I came here, I realized that was not true. I met extraordinary people here – the first day! Wonderful faculty. I met Gary [Miller], the chaplain. He was and is a great person and he encouraged the students to do so much for the poor and downtrodden. Above all I met the students, and what I found in them was an extraordinary appetite for helping others and a passion to help the world. Within just a few days, I realized that what I had heard was not true, because the students were coming down from the hill. They left this hill and they would go into the city of Easton and recognize hunger and do something about it. They would prepare food here and bring it down and open up a soup kitchen. They would go to the prison. They would start a project for the elderly, a project for the street kids.

And there was one project – and I couldn’t help but smile today and even laugh a little bit – a project for the homeless. They had enormous good will but maybe not the best prudence. They would go down into the city of Easton and invite the homeless up here. They would meet them and bring them back on campus. The one fraternity house, Theta Delt, would invite them into their barroom, set up cots, and let them stay there overnight. The men thought they had died and gone to heaven. The students meant well and they had big hearts.

And I remember very well, right over here on one of these benches, sitting down with a group of the students, and they began to share a dream. I once heard a dream in itself is just a dream, but a dream shared with others is the beginning of reality. Those students said, “We want to go to Haiti.” And, within a month, we would go off to Haiti, to northern Haiti, the city of Gonaives.

I remember the first day there seeing a long line of people. There were young people and teenagers and adults, I felt so afraid, and I was ashamed of my own fear, because the Lafayette students were already talking to them and working with them and laughing with them. They were all lepers. I didn’t even know leprosy existed. There were 1,200 lepers in that area of Gonaives. Those students from Lafayette would come back here and say, “We’re got to do something.” They organized a party that in the history of Lafayette was probably one of the biggest parties we ever had. Every fraternity house at that time – I think there were 19 of them – had to give two kegs of beer. We had it at the gym. It was so successful that we raised enough money to build a leper clinic in northern Haiti.

Those young people would go back and go back again, and in a period of just three or four years, we had over 260 Lafayette students who had gone to Haiti. They would found an organization called Hands Together. Many of those young people are still with me today. Doug Campbell graduated from here in 1986. He devoted his life to helping the poor in Haiti. He now serves as our executive director. Many of the young people who graduate from here have stuck with us – Peter Simon [’75] and Jeff Kirby [’84] and many fine young graduates.

I look out at you today, and I want to say thank you. The Lafayette students, they always wanted to go to the toughest places. They went to a place in Haiti called the Cite Soleil slum. It’s documented as one of the poorest and most destitute areas in the world. It’s where I have lived and worked for the last 14 years. There are 500,000 people living on three square miles of raw sewage. When you stand there, you feet literally sink into it. There’s no sanitation, very little electricity. We have a rat population 10 times that of the people. The oldest child stays up at night with a stick to keep the rats away.

But those things you’ve learned to deal with. What’s difficult for me, and I know it would be for you, is to see the children, because the children are dying. One half – 50 percent – of those children will die before their fifth birthday. If you could go back with me tomorrow, what you would see would be thousands of children with bloated stomachs filled with worms. Children have a certain stare in their eyes. Children whose hair should be black turns an ugly color of orange, a sign of acute malnutrition. Then you look at the women. The women age in front of you. They age because it’s unnatural for a woman, a mother, to watch her child die. I don’t know one woman in that area who has not lost a child. The Lafayette students began a clinic there that now serves 20,000 people. It’s the only free clinic in the area. Almost every day at that clinic I have to pull a baby away from a woman begging me to tell her that her child has not died, but it has. Please forgive me for being so graphic, but not long ago – I celebrate Mass every morning for Mother Teresa’s nuns – there was a terrible stench in the chapel, and when the sun came up we found the body of a little girl who had been eaten by rats and dogs. This is an area, the New York Times documented recently, where women in desperation will take mud and mix it with water or spice and let it dry in the sun and then feed it to their children. The don’t realize it has deadly parasites. This is all they have. It’s in this area that we feed 10,000 hot meals a day and, once a week, 200,000 dry meals. We’ve done that for many years.

Then, just four months ago, shortly before 5 p.m., I was sitting in a house that the Lafayette students had organized and founded, a five-story house. In that house were homeless street kids I had taken in over the years. I was sitting on the bottom floor with Doug Campbell when suddenly the earth began to shake. I don’t know if you’ve ever been in an earthquake, but it was the most terrifying moment in my life. I felt the blood coming from my head, and my back was in terrible pain, yet I didn’t know what was going on. My whole body was shaking for 38 seconds. I didn’t even think about going out. I tried getting under a table, but the floor was going in a different direction. You become totally disoriented.

Finally a person ran in and grabbed me and got me out just in time for me to see the building go down. I then began to hear the cries of the young people in that building. One was crying out, “Père Tom, Père Tom, help me!” He was a young boy I found in the streets who had been shot and lost his eyesight. Now he’s under that building, and I could not do anything to help him. For the next 24 hours, I sat there in vigil and watched as they began to pull some out. When the sun came up the next day, we realized that some would never come out. When we found their bodies, we buried them right there on that spot.

Since then, I’ve been living in a small tent just a few feet away from those graves, and every morning I get up and look at that, and then I look at all the response that has come from all over the world. I find myself praying in gratitude to God and, especially, in gratitude to you, the Lafayette community. You heard the cry coming from Haiti, and you responded. I thank you from the bottom of my heart. I speak for all the poor of Haiti: “Thank you for helping the people of Haiti.” I look out at you now, and all I can say is I love you dearly. I will never forget what you have done.

I also have to say to you that the world owes you absolutely nothing, but you owe the world a great deal. I feel a sense of urgency as I look out at you. I realize we’re living in a time when we no longer have the luxury of being indecisive. Each and every one of you has to be very decisive. We’re living in a time that has an orientation of a culture towards self-absorption and narcissism, a time when we don’t value human beings. Looking out at you, I realize why I came up from Haiti – to beg you to be decisive. What I’m asking you to do is to be someone who really cares for this world. Martin Luther King, in 1968, speaking in a church in Atlanta, Ga., said that to be truly alive and truly human you must be three-dimensional. You must not only have a love for yourself, but a love for others and a love for God. I challenge you, my dear graduates, to always be three-dimensional. I challenge you to stand on your own two feet and see the world as it truly is – all that’s good, yes, but all that’s evil, all that’s beautiful and all that’s ugly – and say, “Yes, I can make a difference in this world. I can have the courage to share my dreams with others.”

I thank you. I want to tell you again how much I love this wonderful school. When I walked through here today, I saw the bench dedicated to Rick Thorpe [’89], a student who came with me to Haiti. He died in the World Trade Center, and we have evidence today that he was trying to help people from the 89th to the 80th floor. I passed the memorial out there this morning. I counted 89 Lafayette graduates who died in the Second World War, almost the same number in the First World War, Korea, and Vietnam. You know you are part of a great tradition. Graduates from this wonderful school have gone all over world to help people, and I beg you to take that mission seriously.

My prayer for each and every one of you is this: that you will always be three-dimensional and that the sight of a sunset will mean more to you than your material possessions, that the sounds of children will impress you more than the voices of the powerful and political people of the world. I pray that you will always be able to dance and sing for the right reasons and weep not for having lost something but for the realization that God has given you so much. I believe in you, I love you, and I challenge you.

God bless you and God love you.

Our Pulse Our People